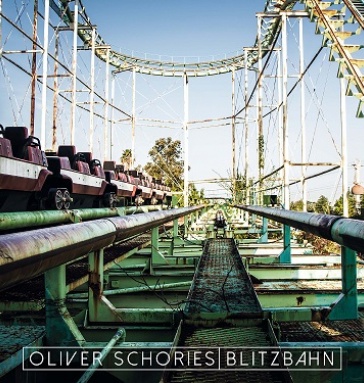 As the wind whistles through your hair, everything passes you by in a blur. Faster and faster you go, faster and more terrifyingly into the abyss you fall. You scream with a mixture of panic and joyful abandon half wanting this to never end but knowing that it will anytime now: a smile creeps across your face. And as it ends, you breathe a sigh of relief, wistfully remembering with powerful emotive accuracy before hurriedly joining the back of the queue for another go ­ after all, it’s just a ride. Life is very much like the ‘Blitzbahn’. It goes up and down, round and round and for much of the ride, we never know what’s going to happen.

Here on his fifth studio album, Oliver Schories explores all the fun of the fair across 13 expansive cuts that showcase his incredible knack for straddling that House/Techno mid­point with consummate ease. Some artists take years to craft their albums, agonising over every detail before, frustratingly, deleting the whole project and starting again. Oliver, however, is as prolific as he is confident of his ability to construct the kind of dance floor bombs that have helped him to build a significant head of steam in the underground.

As someone who considers himself a DJ first, Oliver has an uncanny knack for finding a groove and his musicality far exceeds the normal for the genre. With international festival appearances, club nights and the new crown of Global Underground’s latest NuBreed artist, it’s safe to say Oliver Schories can deliver and deliver his does in spades. On previous albums, certain themes rise to the surface, themes of belonging, of love and of togetherness and ‘Blitzbahn’ continues in that vein. But these are a much more focused collection of tracks written over a mere few months in- between his hectic DJ schedule which showcase the direction his music has developed in recent years.

Whereas Oliver’s last album, ‘Relatively Definitely’, was winsome and light overall, ‘Blitzbahn’ has a heavier, darker and more guttural aural backdrop. Glistening seas of deep growling bass litter the album with powerful understatement pushing the crossover point much further into Techno waters. A tale of two halves, the dance floor ‘Fakir’ , ‘Cobra’ and ‘Ivre’, show an artist in full control with powerful, sinewy workouts. But the real treats await later in the second half which playfully focuses more of the deeper, thoughtful side of Oliver’s sound with cuts such as ‘Kondor’, ‘Magnolia’ and ‘Rummel’ providing a balance. ‘Blitzbahn’ is Oliver’s most accomplished work to date: focused, passionate dance music for the 21st century from one of the unsung heroes of the scene.

‘Blitzbahn’ will be available from 2nd March 2018 via SOSO.

Listen to the first single from the album: