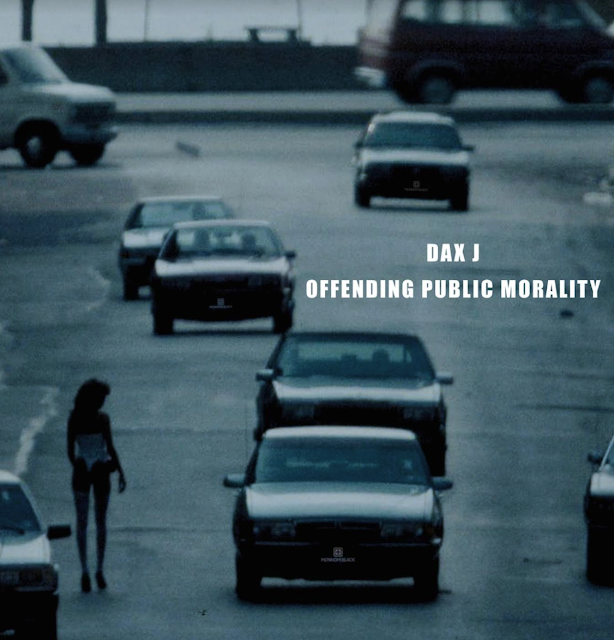 Dax J’s success within the challenging environment of international DJing and music production has been considerable, yet he hasn’t chosen to passively bask in the comfort of his accomplishments. Instead, he has used his recent experiences to create sonic weapons to confront “public morality” with a themed album of the same name. The concept of “public morality” is one that can be used to help solidify the bonds that hold together society, but on the other hand, it can also provide the basis for acts of exclusion and scapegoating within that same society.
Touching upon numerous “hot button” issues that could offend non-reflective, puritanical sensibilities (i.e. drug abuse, racism, prostitution, murder), Offending Public Morality sprawls out like a foreboding urban landscape and calls upon all kinds of sound elements that will be new to those already familiar with Dax J. Though he has been closely identified with the techno genre this new set makes knowing nods towards his influences in the UK jungle / drum ‘n bass scene, while also undertaking exercises in IDM, EBM, acid and other forms of uncategorizable intensity. From the introductory “Babylon Brutality”, which nails gritty film samples to a lush vocal elegy and authoritarian percussion, Dax J presents a story wherein creative, exploratory energy is constantly forced to contend with paranoiac, racist and exploitative tendencies. It’s a relentless record typified by dark undertones and raw, unfiltered energy.

Equal portions of positive excitement and dread are present in the sequencer-powered, dialed-in rush of “Reclaim Our Lost Honor” or “Offending Public Morality” (whose Middle Eastern-flavored keys separate it from many likeminded journeys into Euro-coldness), while acid-dripping cuts like “Unrepentacostal” and the jungle cyborg stomp “Mustapha Mond” take a darker, chillier approach. There are plenty of seductive moments to keep the force of impact from being too overwhelming – especially Zanias’ guest vocal turn on “Waves of Isolation,” and the flaring brightness of “Feed The Pigeons” – but these moments of beauty tend to only highlight the importance of Dax J’s overall message.

That this message can be conveyed clearly with such a variety of different sound techniques is a real testament to Dax J’s skill as a producer, but also to his perceptiveness and his resilience in the face of adversity.

Offending Public Morality draws up the lines of conflict in a way that’s vivid and loud as possible; using radical sounds to document the ongoing struggle between free expression and violent repression.