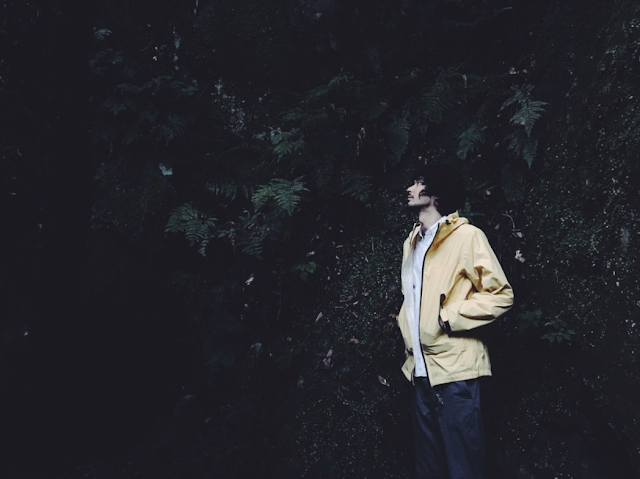 Japanese recording and soundscape artist Eshima Kazuomi has released an LP under the moniker of his solo project, Kafuka. Released on May 26th through Project Mooncircle, the album was mastered by acclaimed engineer Sven Friederichs, and has received praise from the likes of Kaltblat Magazine, XLR8R, BBC 6 MUSIC, as well as renowned producer and DJ Laurent Garnier.

As described by Kaltblat Magazine, “Reprocessing samples and recording guitars and other natural sounds, he creates a collage of dreamy textures, slowly evolving melodies, and stuttered rhythms that call back to the roots of IDM while simultaneously tackling new emotional ground,” the basis of the album is strongly influenced by nature, and the amalgam of textures contained within it are the result of adding algorithmically generated elements using audio software.
‘Fine Rain’ is an interesting exemplar of Kafuka’s distinctive sound. It conjures the kind of emotional response to that of damp air, water-laden leaves and fragile droplets falling with monotonous regularity.  Although the track contains an abundance of different sounds and textures, it does not deviate from its underlying organic foundations, and serves to remind us that man’s contact with nature still remains both extensive and profound.
“Mustang,” the second single which was released from the album, is an example of Kazuomi’s unique ability to convey the ambience of nature through the use of electronic sounds. The track harnesses an energetic atmosphere and, as the title suggests, it conveys the same feeling of urgency as that of a herd of wild horses bounding across an open landscape.

Describing ‘Laws of Nature’ Kafuka says, “To forget the pursuit of harmony. To recall the past to make a future. Forever seeing yourself reflected, feeding back in eternal repeating cycles. A dialog with oneself within the natural world. Choosing a final destination as the journey ceaselessly repeats. I hope to share what I’ve experienced in this big journey. I hope you will feel both a sense of nostalgia, and a sense of newness. That makes our harmony”.

Listen to the album teaser below and buy here.

446
May 29, 2017
Previous articleSUNSQUABI – “PYGMY UP” FT. RUSS LIQUID
Next articleINTERVIEW // We Catch Up With… SizzleBird